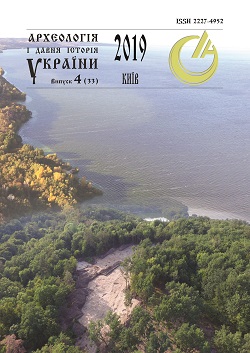 Issues: The journal publishes the results of research on the archaeology and ancient history of Ukraine and neighboring regions. The issues of socio-economic development and cultural relations in the Stone and Copper-Bronze Ages, pages on the history of the Cimmerians, Scythians and Sarmatians, material and spiritual culture of the ancient Greeks in the Northern Pontic region, ethnogenesis and early history of the Slavs, the development of Greek and Roman cities and villages, the material culture of the Middle Ages and early modern times are covered. New archaeological materials, the research on the history of archaeology and archival sources are published.

Founder: Institute of Archaeology, National Academy of Sciences of Ukraine.

History. The series was founded in 2009. In 2010 the continuous numbering for the issues of series was launched. In 2011, after the receipt of the certificate (and henceforth the international number for periodicals), the series was transformed into a journal appearing in two volumes a year with the assignment of annual numbers and the continuous numbering of issues. In 2015, according to the decision of the Academic Council and receiving the confirmation letter from the Ministry of Justice of Ukraine, the journal became the quarterly to be issued four times a year.

License Terms: The authors retain the copyright, granting the journal the right to publish original scientific articles containing the results of practical and theoretical research and not submitted to other publications. The materials are subject to license Creative Commons Attribution License International CC-BY, which enables the distribution of each article by others with acknowledgment of authorship and initial publication in this journal.

Open Access: The journal adheres to the common international Open Access practice: right after the issue the articles are published indefinitely and free of charge in the "Archive".

Web-sites and location of journal materials: